In 1921, the first Amilcar of the type CC rolled out of the factory.  However, they were soon able to increase production to five cars a day.  The Amilcar make only became really famous with the arrival of 1924 CGS.  This car had brakes on all four of its wheels and was powered by a 1074 cc side valve engine delivering 28 bhp.  At the end of the twenties, a lot of French car manufacturers got into financial difficulties because of the approaching world recession.  The Amilcar make was subsequently taken over by Hotchkiss.  Money for the development of new models became available again. 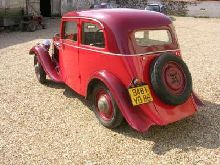 Suggest a link relating to Amilcar