A Californian sports car of 1962, the Apollo was designed by Milt Brown, styled by Ron Plescia, and the bodies, most of which were coupes, were made by Intermeccanica in Italy.  In style it resembled a cleaner and longer MGB GT but, note, not even the MGB roadster had been announced when the Apollo was styled.  Buick V8 engines of 3.5 or 5 litres were used in a tubular ladder frame with suspension and other components from the Buick Special.  With the larger engine fitted, top speed was claimed to be 150mph/240kmh (0-60mph in 7.5 seconds) but the company was not sufficiently strong to advertise nationally, or establish a dealer network.  To make matters worse, nobody thought very highly of the power unit - the Buick engine (which lives on as the Rover V8) was notorious for giving trouble- the bodies were expensive, and production ceased in 1964.

Intermeccanica then supplied the bodies to a firm in Texas, which used them to make a car called the Vetta Ventura.  Production of the Apollo was resumed in 1964 but this venture was dead by the following year.  In all 88 Apollos (11 of which were convertibles) were made, together with 19 Vetta Venturas, but not all Apollos were delivered and some were quietly scrapped.

Trivia fans might like to know that an Apollo GT was the car driven by the 'baddies' in The Love Bug. 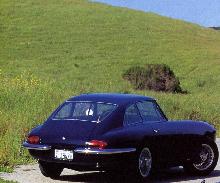 Suggest a link relating to Apollo