The Decauville make was already famous for locomotives when the company set out on its automobile adventure in 1898.  Instead of starting from scratch, a design by Messrs Joseph Guedon and Gustave Cornilleau was purchased for 250,000 French Francs.  Cornilleau was also taken on as chief engineer.  The car had a peculiar structure, featuring not only independent suspension, but also two engines.  During the first year (1898) 107 were supplied.  By 1904, this number had risen to 350.  From 1905, the company began specialising in larger models with a four-cylinder engine.  The customer could choose from engines ranging from 2.7 to 9.2 litres.  Unfortunately, demand for cars fell dramatically, and the company was forced to close it gates in 1910.

This long-established manufacturer of narrow-gauge railway locomotives and equipment entered the automobile industry by undertaking construction of a light four-wheeler designed by Joseph Guédon and Gustave Cornilleau. It featured a two-cylinder 3½hp air-cooled engine of De Dion-Bouton pattern but not manufacture, located under the seat. The engine drove the un-sprung rear axle via a two-speed gear, whilst the front wheels had independent suspension by transverse leaf spring, although the merits of this system failed to be appreciated at the time. Decauville called its vehicle a voiturelle, in order not to offend Léon Bollée who had coined the word voiturette for his own small three-wheeler. Others were not so sensitive!

Engine power was increased, water-cooling was added, and in 1900 a two-cylinder front-engined car was introduced but the voiturelle continued to be made until 1902. Four-cylinder models followed but good though the cars were Decauville had continuous problems with profitability and ceased making cars in 1909 before its whole enterprise collapsed, continuing only with railway related activities. 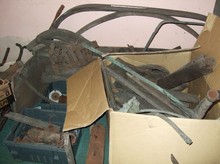 Suggest a link relating to Decauville