Dodge had a concept car, known as the Firearrow, built by Ghia in 1953.  Gene Casaroll, whose company transported Chrysler products, was so impressed by the car that he asked the head of Dodge, William Newberg, if he could make the car.  Newberg agreed and hence the first Dodge chassis were sent to Italy.  The Dual-Ghia, as the car was dubbed, was an instant success and Casaroll decided who was permitted to buy one.

Frank Sinatra drove one, together with Eddie Fisher, Hoagy Carmichael, and Lucille Ball, but Sammy Davis Junior and Dean Martin were refused.  Casaroll did not make money from the car because he sold them for under $8,000 but since each car required more than 1,500 man hours of labour, he lost $4,000 on every car made.

When Dodge changed over to a body of unitary construction in 1958, this meant the end for the Dual Ghia.  Between1956-58, 117 of them were made of which 102 were convertibles, two hardtop coupes and thirteen prototypes. 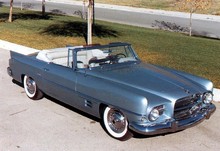 Suggest a link relating to Dual-Ghia