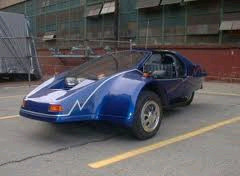 The Fire Aero was a very cleverly thought-out kit conversion that changed a normal motorcycle into a side-by-side two seater, three-wheeler, with two wheels at the front similar to the well-known British Morgan three-wheeler layout. In America, these are known as 'Reverse-Trikes.' Designed by Dave Stollery, it was manufactured in the mid-1980's by the Industrial Design Research Company, based at Laguna Beach, California, U.S.A.

A Company recommendation was that the motorcycle used should be no less than 750cc and that the rear wheel should be replaced by a 15" x 4.5"/5" rim and automobile tyre for better traction. The front forks, wheel, handle bars and saddle had to be removed and the conversion kit supplied a rectangular steel chassis frame, plus a Volkswagen 'Beetle' torsion bar front suspension, a rack and pinion steering box, the complete interior and the two-piece fibreglass body - the rear part being hinged at the top immediately after the driver/passenger cockpit to allow 'alligator' style access to the entire motorcycle component. 'Gullwing' doors, which opened 'scissor' fashion, a heater, reverse gear and a stereo music system were offered as optional extra's. If preferred, it could be driven in 'T' bar style without doors. There were several Japanese motorcycles that were suitable for this conversion and a change to a larger size presented no major problems. For those that missed the 'wind in the hair' experience of the motorcycle, the whole conversion was easily reversible and the car could be transferred back to a motorcycle very quickly.

The first version of the Fire Aero was air-cooled, but cooling problems forced a re-think and resulted in a water-cooled version. It was also given a slightly larger cockpit. Only those two versions were produced.  In 1988, the Company was sold to CAV (Californian Alternative Vehicles) who produced the three wheeler in finished, ready-to-use form only.  Fire Aero has since returned to the hands of it's creator, Dave Stollery, but despite it's obvious appeal, no future production is planned at this time.  Several Fire Aero's of both types are still in use.