It is best known for producing the Falcon, originally a U.S. model introduced in Australia in 1960, but adapted to Australian requirements and road conditions. Since the early 1970's, Falcons have been fully Australian designed. It also produces a four wheel drive model called the Territory. In 1934 the company invented the concept of the ute.

T-model Ford car parked outside Geelong Library at its launch in Australia in 1915
The Ford Australia plant under construction in Geelong, 1926.Originally, Ford Australia manufactured or assembled smaller models, but these are now fully imported. These included the Escort and Cortina from the UK, and subsequently the Mazda-based Laser and Telstar from Japan. These were adapted for the Australian market: for example, the Cortina had a 4.1 litre engine. In 1977, lack of capacity meant that the Cortina wagon was in fact assembled in Renault's (now long since closed) Australian factory.

The Laser was produced in Ford's plant at Homebush in Sydney until September 1994, when the plant closed, after which they were fully imported from Japan. The Laser was replaced by the European Focus in 2002. It is currently offered in sedan and hatchback variants with a 2.0L engine, and is a quite decent selling model with some months hitting in the top ten sales. The Fiesta, heavily promoted as a product of German engineering, has been also a decent seller.

Ford Australia no longer has a medium sized model, having dropped the Mondeo in 2001, arguing that the segment of the market in which it competed was in decline in Australia; it is probably closer to the truth to argue that this segment is already satisfied by other manufacturers such as Toyota.

The Ford Discovery Centre, a museum of the history of the Ford Motor Company in Australia is located in Geelong. 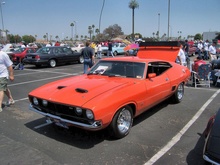