After working at the Oldsmobile, Ford and Regal factories, Hupp founded the Hupp Motor Car Company in Detroit in 1908 with J. Walter Drake, a former lawyer, in the position of company President.

His first car, the Model 20, which he named 'Hupmobile' was a two-seater runabout powered by a 2.8 litre four cylinder engine with high tension magneto and a two-speed sliding gear transmission. It was shown at the Detroit Auto Show in February 1909 and was sold as a competitor to the Model T Ford. Designed by Hupp and E. A. Nelson, it sold well and between March and December 1909 a total of 1618 cars had been delivered.

In May 1910, Robert Hupp formed and became President of the Hupp Corporation, which included the Hupp-Yeats Electric Car Company, the Hupp-Turner Machine Co. and the Hupp-Johnson Forge Co. Charles D. Hastings was appointed vice-president and his brother Louis Hupp was made secretary/treasurer.

But Robert Hupp had disagreements with his partners in the Hupp Motor Car Co. because he paid too much attention to the Hupp Corporation and in September 1911, he sold his shares and left the company to found the RCH Company. There, he produced a car very similar to the Hupmobile 20 that would be in production until 1916.

Designer Frank E. Watts joined the company in 1913. The production cars were models K, N and R powered by four cylinder side-valve engines. They were fitted with electric lighting and starter from 1914 on.

In 1916, the company name was changed to the Hupp Motor Car Corporation.  By that time, production was running at just over 12,000 cars annually, but the onset of WWI had the company switching to the production of trucks under contract to Denby, who's vice-president was Walter Drake.

From 1918, the model R Hupmobile was the only car produced until it was joined by the straight eight engined model E in 1924. The model R was finally replaced by the six cylinder model A in 1926.

Bodies were made by the H and M Body Corporation (Hupp and Mitchell) in Racine, Wisconsin, but Mitchell went out of business in 1923 and the company was later sold to Murray, one of the biggest body suppliers in America, who's stylist, Amos Northrup was responsible for the 1928, 1932 and 1934 Hupmobiles.

In the late 1920's, Hupp had 'custom' bodies available, styled by Dietrich on the 'Distinguished Eight' chassis.

1928 was the company's best year ever with sales of 65,862 cars and an eight storey addition was made to the Detroit factory.

The Hupp Motor Car Corporation acquired the Chandler-Cleveland Corporation in Ohio in 1928 and continued to manufacture Chandler cars for six months.

The lower priced Century Six range was transferred to Cleveland and were produced there for three years.  But when the Depression hit the company and sales dropped, the Century Six returned to Detroit, although their bodies were still built at the Cleveland body plant.

From 1932 on, they never produced more than 9,500 cars annually.  The Hupmobiles of 1932-1933 were the work of Raymond Loewy and were particularly stylish, earning Loewy several design awards. But they were replaced in 1934 with the introduction of the 'Aerodynamic' Hupmobiles, also styled by Loewy, with three panel 'bay window' type windscreen, faired-in headlights, flush mounted spare wheel and a radio fitted as standard. A smaller 'Aerodynamic Six' with a flat windscreen was offered in 1935.

Archie M. Andrews was appointed president of the company in 1934.

Andrews, a company promoter, had been involved in the disastrous agreement between his own company, New Era Motors and Kissel & Moon that had finished off Kissel as a car manufacturer in December 1930. He had also promoted the ill-fated front drive Ruxton.

He had many plans in mind; a front wheel drive Hupmobile, a merger with Willy's that would have given Hupp a new small car based on the Willy's 77 and the sale of Willy's and Citroen cars through Hupmobile dealerships.

But Andrews' differences with the Securities and Exchange Commision together with his reputation, put off possible rescuers of Hupp and Andrews left in 1935 with Hupp over $1,000,000 in debt and unable to get credit.

After only 74 of the 1936 models were built, the directors closed the company down until mid-1937.

Until the 1938 designs were ready, a few cars were built from the remaining 1936 parts.

The 1938 cars were more traditional and had conservative styling in-line with the cars of their competitors. They were fitted with the 4 litre six cylinder and 4.9 litre eight cylinder engines that were used in earlier models.

But a slight recession in the automobile industry saw sales dip sharply again.

The intention was to produce a cheaper, rear wheel drive version called the Skylark, but the dies were extremely complicated and after completing only 35 hand-built prototypes, Hupp realised that they couldn't afford to put it into production.

De Vaux knew that Graham-Paige were in similar difficulties at that time and contacted them, resulting in an arrangement brought about by mutual desperation whereby both company's would use the dies and make their own version of the same basic car.

The new cars had free standing headlights instead of the original Cord retracting lights and a more conventional nose with distinguishing features such as the grille to identify each manufacturer.  From the scuttle back, both the Graham and the Hupmobile would be exactly as the original Cord design.

The Hupmobile Skylark was eventually produced by Graham-Paige, but it took nine months to get the line started.  Production lasted from May to July 1940 with a final total of only 319 Skylark's delivered before Hupp went itno receivership.

It was the end of the Hupmobile car, but the Hupp company continued with contract machining and stamping.

In July 1946, Hupp headquarters were moved to Cleveland and their name was changed to the Hupp Corporation.  They concentrated on heating and air-conditioning equipment and became the Hupp Division of White Consolidated Industries in 1967. 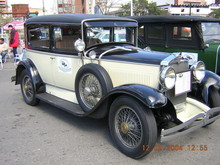 Suggest a link relating to Hupmobile