In 1904, Adrien Piedboeuf gave up his partnership in Metallurgique in Aix-la-Chappelle, Germany to build first motorcycles and later cars in Liege, Belgium.  His first cars bore the Piedboeuf name and he sold them mainly to his family and friends.

Piedboeuf later called his cars Imperia's after the Holy Roman Empire and took the Crown of Charlemagne as his emblem.  The first range of cars under the Imperia name were of 3 litres, 4.9 litres and 9.9 litres, designed by the German engineer Paul Henze in 1908 and the firm moved into the old Pieper factory at Nessonvaux.  In 1910, Imperia merged with Springuel and cars emerging from the factory were known as Springuel-Imperia's.

In 1913/14, Senor Abadal, the Spanish agent for Imperia's asked the firm if they could produce a sports car on the lines of the extremely successful Alfonso XIII Hispano-Suiza and the result was almost a carbon copy except for the V-radiator.  Even the top speed of approximately 75mph was comparable.  Two sporting Imperia's were made and, although not widely known, these were actually Spanish Abadal's.

During World War One, Imperia abandoned all activities and after the Armastice, the company was acquired by Mathieu van Roggen, formerly the owner of a marble quarry.  Less than 200 cars were built between 1919 and 1923.  All were badged Imperia-Abdal's, but in 1923, the Abdal part of the name was dropped.

For several years, the company had built luxurious, massively expensive, large engined cars and the sales figures were ridiculously small.  The management realised that, if they wished to survive, then the future lay in a more practical, economical car and designer Arnold Couchard, formally of F.N. designed a 1 litre, 4 cylinder car, sometimes referred to as the Imperia-Tili.  Technically interesting, its engine rotated anti-clockwise and the transmission brake acted as a servo for the front brakes.  It was also one of the first cars to have a sliding roof.

In 1934, Imperia acquired the Belgian rights from the German Adler company and until 1940, listed 4-cylinder, front-wheel drive cars with independent rear suspension.  As Minerva had taken control of Adler, the 1 litre Trumpf Junior and the 1.6 litre Trumpf were called Minerva-Imperia's.

Designated TA-9, they used Belgian built chassis and bodywork.  The following year, van Roggen acquired what was left of Minerva and made a deal with Voisin to build Imperia's at their factory in Issy-les-Moulineaux, selling them in France as Minerva's.

During World War Two, the Germans took charge of the works.

Postwar, Minerva-Imperia production continued until 1949 and approximately 1,000 TA-8 cars were built using Hotchkiss-Gregoire power trains.  That year, production of cars in their own name ceased and they began assembling Standard Vanguards under licence.  Some were fitted with Imperia built cabriolet bodies.

The company was finally liquidated in 1959, when Standard-Triumph decided to assemble cars for the Belgian market in its own new factory at Malines. 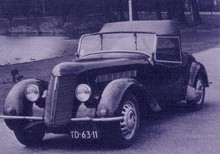 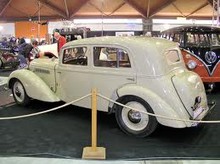 Suggest a link relating to Imperia