The Marcos stylist Dennis Adams created an exteme design study in 1969 that caused alot of interest.  The Design Probe Number 15 was 29 inches tall, achieved by inclining the passengers almost horizontally, making the roof slide back for access and fitting a compact 875cc Hillman Imp engine in the tail.  Demand led Adams to comtemplate a production run but it was simply too impractical a car.  The Daily Telegraph sponsored a revised design, the Probe 16, for its stand at the 1969 London Motor Show.  It was 5 inches taller, had an electric sliding roof and a mid-mounted Austin 1800 engine.  Only three or four such cars were made before the Probe 2001 of 1970.  Still very low at 37 inches, it retained the mid-mounted BMC 1800 engine but had a redesigned body, now featuring a rear aerofoil for roll-over protection.  Four production 2001 cars had been built by 1971, but its believed that a number of further bodyshells were made, so that possibly 20 Probes of all types were made in all. 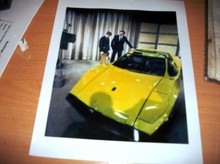 Suggest a link relating to Probe