Mention the name RALEIGH to most adults and bicycles immediately comes to mind.  They were the first company to build an all steel bicycle in 1901 and went on to become the biggest bicycle manufacturer in Britain.  They also built motorcycles and mopeds and had three separate attempts at car manufacture.

The Raleigh story began in 1877, when businessman Frank Bowden, the inventor of the rim acting brake, was taken seriously ill in Hong Kong and given only a few months to live. He relinquished his business interests and returned to England where, on his doctor's advice, he took up cycling.  Miraculously, he overcame his illness in only six months and became an enthusiastic cyclist.  He was so impressed with his recovery and the bicycle that had played such an important part in that recovery, that he decided to visit Woodhead, Angois and Ellis, the makers, who were situated in Raleigh Street, Nottingham.  There, he found a handful of workers turning out a mere three bicycles a week.  Bowden made a successful offer to the company and only three years later, due to rising production, they made a move to a four storey building in Russell Street, Nottingham.

He changed the company name in 1887 to the Raleigh Cycle Co. in rememberance of the original address.  In 1889, the company progressed to building motorcycles and between 1903 and 1908 they produced a water-cooled 3.5hp three-wheel chain-driven vehicle that they called the 'Raleighette' that had a wicker passenger seat positioned between the two front wheels. This was developed into a 6.5hp version, but Raleigh began to make a loss and returned to bicycle manufacture.

Their first car was designed by T. J. Biggs in 1905 and used a four cylinder 16hp Fafnir engine. But it didn't get past the prototype stage.  A further attempt was made in 1915 with a shaft driven cyclecar powered by an 11hp four cylinder Alpha engine.  A few were made, but production ceased at the onset of WWI.

Motorcycles were made again from 1919 until the early 1950's. An experimental car with a flat twin engine was designed in 1922, but it was never marketed.  In 1930, Raleigh built a chain driven 5cwt Delivery Van based on the Ivy Karryall three wheeled parcel van that they had aquired the rights of in 1929.  This had an enclosed body and the front forks and wheel of a 500cc motorcycle protruded through the front, carrying a single headlamp that turned with the forks. The engine was later increased to 600cc. It had handlebar steering and a two seater version was introduced in 1933.  The van was dropped by Raleigh in 1934 and would play an important part in the creation of another motor manufacturer that same year.

September 1932 saw the introduction of a single cylinder chain driven light saloon and tourer based on the motorcycle derived 5cwt light van.  These were replaced in 1933 by the Raleigh 'Safety Seven', designed by Tom L. Williams who had joined Raleigh in 1930 specifically to run the Motor Department.

After several mergers with other cycle manufacturers in the 1950's, Raleigh finally became the cycle division of Tube Investments.

Tom Williams bought the rights to the van that he had designed and went on to be the founder of the Reliant Company in Tamworth, Staffordshire in 1934. 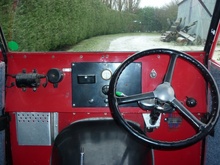 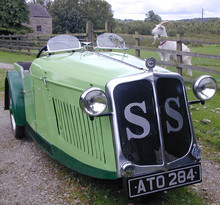 Suggest a link relating to Raleigh