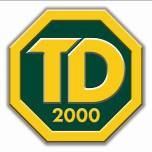 The history of the TD2000 dates back over 24 years to 1984 when enterprising Australian Jaguar dealer, Ross Marshall, bought the original MG TD tooling, which had by then found its way to the USA. After a number false starts, a group of Malaysian entrepreneurs headed by Eddie Teo, the boss of Malaysian car importers Inchcape, bought all rights and tooling for the vehicle and formed TD Cars Malaysia – see http://www.td-2000.com/ and REVIEWS for a more detailed story.

The MG TD had been the most successful of the “T” series midgets with some 29,664 cars being built between 1949 and 1953. It also spawned a number of replicas particularly in America where they were often based on the VW Beetle. However, Eddie Teo’s objective was to develop a car that might have been built by the MG car company if, like Morgan, it had remained independent. The result is the 130bhp, Toyota engined, TD2000 Silverstone which is currently sold in many countries across the world.

Writing in MG Enthusiast, Simon Goldsworthy commented “There have been many takes on the MG TD and TF themes over the years, some of them good and some decidedly dodgy. But the Malaysian-built TD2000 is probably the best of the lot, taking a high standard set by the Naylor TF in the 1980s and moving it on two decades. . . . The TD2000 Silverstone is not an MG TD, a self-evident fact given the history of the two models and one that will rule it out as an option for some enthusiasts. It is though a fine tribute to the breed, and anybody who wants old car style without old car hassle will most likely have much more fun behind the wheel of a TD2000 than behind the wheel of the real thing.”

Suggest a link relating to TD2000