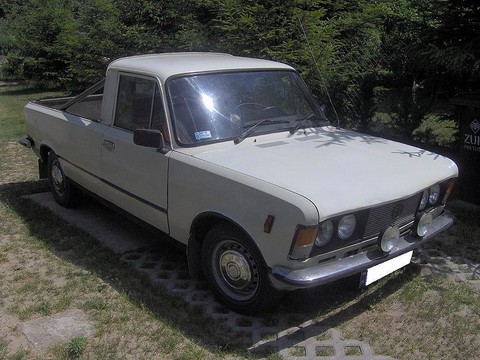 In the 1960s, the only passenger car manufacturer in socialist Poland was the FSO in Warsaw, which manufactured the dated Syrena small car and the Warszawa, a larger model whose roots could be traced back to 1940s. Even within the realities of a centrally planned, socialist economy, the need for a replacement was felt. Although Warszawa-based replacements had been under development within the FSO, the authorities decided to pursue talks with the Italian Fiat, which was seeking to expand its international presence by establishing production in the countries of the Eastern Bloc.

On the 22 December 1965, a license agreement was signed concerning manufacturing of intermediate-sized cars in Poland. The automobile concerned was a model specially devised for production in Poland - combining the body and braking system of the newly-launched Fiat 125 with the driveline and other chassis elements from the retired Fiat 1300/1500. The FSO had to be refurbished to be able to handle the assembly of a modern car, so world-class machinery was ordered from Western companies. FSO's over 100 Polish suppliers were also involved in the effort, as well as other manufacturers from the Eastern Bloc assembling Fiat-licensed models - Crvena Zastava works in Yugoslavia and the newly organised VAZ in the Soviet Union. The production preparation process took almost two years, with the assembly of pre-production test series from parts imported from Italy commencing on 28 November 1967. By the end of the year, 75 such cars were assembled.

Polski Fiat 125p of 1972, with a chrome grill.Polish cars differed in detail from Italian ones; most visibly there were four round headlights instead of two square ones. A less visible but significant change in the Polski Fiat was a safer flat fuel tank above the rear axle, instead of Fiat's vertical tank on the rear right-hand side. It also had more durable 4-wheel disc brakes, thanks to mud covers.

Unlike the Fiat 125, the car was also available as an estate (PF 125p Kombi), and a pickup. The stationwagon won the 1978 "Estate Car of the Year" award in the United Kingdom.

A few cars were made with original Italian 1600 cc (PF 125p Monte Carlo) and 1800 cc (PF 125p Akropolis) engines, intended mostly for racing. An unusual variant built in a small series was a lengthened cabriolet with three rows of seats, used by the tourist bureau in Warsaw for sightseeing.

There was a small restyling in 1973, when the chrome front grill was replaced with black plastic one, and in 1975, when a new black plastic grill arrived along with new turn indicators, enlarged rear lamps (instead of pairs of thin vertical ones), and a mildly modernised interior. The power of both engines was also raised by 3.7 kW. From 1983, the car was produced as the FSO 125p 1500/1300.

The car was produced until 26 June 1991; in total, 1.445.689 were manufactured. By that time the design was 24 years old and used mechanicals which were essentially 30 years old, with only minor improvements.