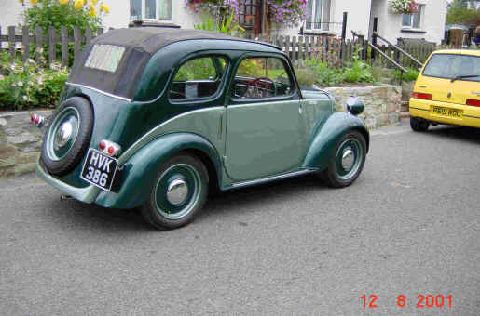 Early in 1939, a four-seater Topolino was introduced called the 'Convertible Four'.

Information regarding the Convertible Four is very scarce although it must be available somewhere.

The standard FIAT 500 Topolino was well accepted in England.  But the true English motorist of pre-WWII days was a family man that enjoyed the pleasures of the countryside and regularly took his family out to find a nice little spot for a picnic.  Therefore, the four seater car was considered a 'must' and as other small cars such as the Austin 7 and the Morris Minor were popular, someone decided that a small four seater with a streamlined body would stand a very good chance of success.  It was reputed to have been converted from the FIAT 500 van by Messrs C. R. Abbott of London and certainly it bears a very strong resemblance to the van.  But the body line from the waist down suggests that it could just as easily have been based on the normal 500 two door, two-seater saloon.

Engine, chassis, running gear and instrumentation was identical to the standard car, with the exception of the final drive ratio which was increased from 4.87:1 to 5.i:1 to compensate for the additional 1 cwt of the larger body.

There was ample room for four adults of normal stature and room for limited luggage behind the back seat.  As with the production 500 saloons, there is no boot lid and all luggage had to be loaded through the two doors into space made available by pulling the back seat squab down.

A road test of the Convertible Four was carried out by staff of 'The Motor' magazine in April 1939 who were quite obviously very impressed by the performance of the test car with four adults on board. The notorious 'Porlock' hill was negotiated in first gear without any trouble at all. Reference was made regarding the 'excellent brakes' and the 'finger-tip' steering.

It is thought that all Convertible Four's were produced with two-tone colour schemes - even that these were metallic colours - but the lack of records make it impossible to substantiate this.  It isn't even possible to hazard a guess at how many Convertible Four's were built, but only a handful remain in this country and on the Continent and very few are usable at this time.  What is known is that they command a much higher price today than the equivalent FIAT 500 convertible or fixed head saloons. 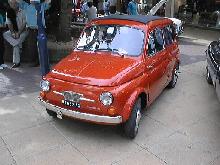 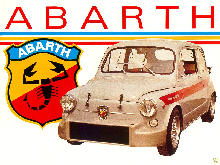 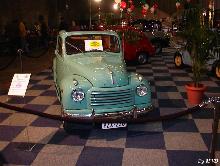 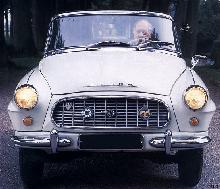