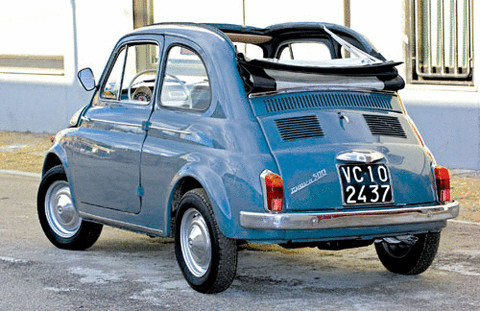 Both the FIAT 500 'Trasformable' and the 'Sport' were in production in the early part of 1960 and both wore the 'Nuova' title for the last time.  The 'Trasformable' had a full folding roof and early 1960 examples were mistakenly referred to as 500D's because the 500D was introduced that year.  The 500's bigger sister, the FIAT 600 became the 600D in mid 1960 and the 500D made its debut approximately one month later. The 'Trasformable' and the 'Sport' were dropped from the range at that time and the short folding roof was accepted as standard for later models.  A 499.5 cc engine (67.4 mm x 70 mm stroke) based on the 'Sport' engine was fitted, but rated to give 17.5 bhp at 4,400 rpm.  To allow more space under the front 'bonnet', the petrol tank - redesigned to take 21 litres of fuel - was now square shaped with very rounded contours.  Re-positioned on one side of the front boot rather than right across as the original, it allowed room for a reasonable sized suitcase or soft bag to be carried.  Inside, the back seat, realistically only suitable for two small children, now had a fold down back and two foot wells were pressed into the floorpan.  Other additions were windscreen washers, two padded sun visors and a brightness/dimming facility for two small dashboard lights indicating main beam and direction indicators.  On earlier cars, the windscreen wipers were positioned for cleaning the windscreen of left-hand drive cars only, leaving critical parts of the windscreen untouched when used for right-hand drive. In a futile attempt to address the problem, a longer windscreen wiper blade was fitted on the driver's side, but eventually, the problem was dealt with correctly and the wipers were repositioned for right-hand drive cars.

Source: Reg J. Prosser
Have you any further information on this car?
Click here to tell us.
There are 3 further pictures
[View Full Gallery]
Related Contacts
[ suggest a contact ]
Related Links
[ suggest a link ]