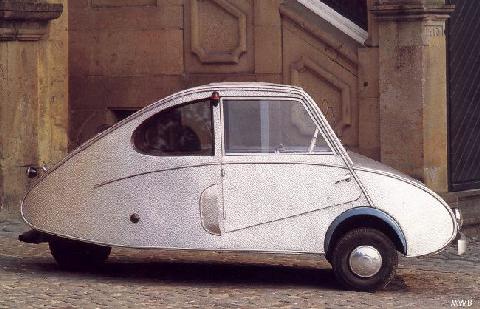 The car weighed a mere 310 kg (682 lb) and had a top speed of 40 mph (65 kph).  There was a huge demand at that time in for such cars but production did not get under way until February 1951.  The production model had a 247 cc two-stroke engine developed for use in chain saws.  The engine produced 8.5 bhp at 4,200 rpm.  To save weight and costs, the body was made of plywood covered with leather.  Since no-one was entirely happy with the Fuldamobil N-1, Stevenson designed a new N-2 model in the summer of 1951 which had a body of beaten aluminium, for which paint was un-necessary.  The N-2's single cylinder 359 cc engine was by Fichtel & Sachs and it produced 9.5 bhp.  The N-2 was supplied until 1952.  Fuldamobil only sold 380 which seems rather few compared to the 700 sold by NWF (Nordwestdeutscher Fahrzeugbau) who built the N-2 under licence.