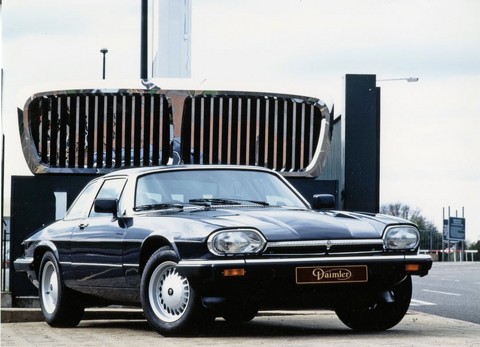 Request into Styling from Jim Randle to look at sheet metal removable hardtop for XJ77 (convertible) program. This occurred in 1985.

B.I.W. work had already started at Park Sheet Metal (Bedworth) by this time, using a Cabriolet XJS body as a platform.
(Vin 123188 Body 5V002318 in Windsor Blue) (added by Bleasie)

Jim Randle and Geoff Lawson consider what to do with the body shell now that hardtop requirement has gone away. Is there a different opportunity to explore?
A decision is reached to explore an 'up-market' XJS as a niche market opportunity and G Lawson commences styling program (assisted by Fergus Pollock) at Park Sheet Metal – most of the styling input taking place at weekends to keep project away from mainstream studio activities.

No drawings were prepared, we worked directly with metal workers creating mock-up panels, reforming and modifying shapes and sections as required.  Lead-loading for the haunches were modelled and highlighted using di-noc they were difficult to execute professionally.  Several grille designs were tried. Road wheels were G.R.P. mock-ups. (handwritten -They had been designed for another programme)

Having completed (the) concept model, it was informally reviewed by senior management.

The business rationale was presented as:-
Low volume, off-site build – probably at Park Sheet Metal.
Possibly 4 WD coupled to V12 only, installed by F.F. Developments.
Special interior (not featured on model) to be styled and finished into the vehicle by Limo Shop as a batch production approach.
Reactions were positive but mixed. The car was cliniced in Los Angeles against XJS Cabriolet.

The results were not supportive of taking the concept any further - it was not perceived, on the West Coast at least, as the kind of car Jaguar owners were prepared to pay a fairly high on-cost for – the Cabriolet and Coupe were preferred and the convertible was what they were really after!!

The concept model (a running car) has remained in Styling since then.  It was completed in 1986, and we never bothered re-working the interior to Daimler standards. We retain the car as a non-sensitive display model and have discussed the possibility of stretching the w/base by 3-4" to enable good rear passenger comfort standards, although I doubt we'll have the resource to go ahead with this work in the immediate future.

(handwritten Les, We actually built the car (following a paint job from the Limo-Shop) by putting it down the XJS line at B/Lane. This caused quite a stir amongst the workforce who wondered what the hell was going on!

M. Beasley complained to me about it, but we pointed out that only the very best 'foreigners' were tracked!)