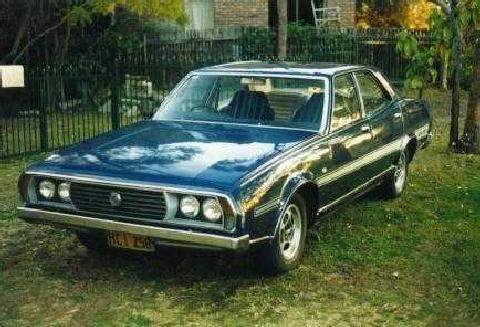 The Leyland P76 was a large car produced by Leyland Australia, the Australian subsidiary of British Leyland.  It was intended to provide the company with a genuine rival to large local models like the Ford Falcon, the Holden Kingswood, and the Chrysler Valiant.

Launched in 1973, it was nicknamed the 'cheese wedge', on account of its shape, with a large boot (trunk), able to easily hold a 44 gallon drum. Although station wagon and 'Force 7' coupé versions were designed, these never went into mass production.

The shape was penned by Giovanni Michelotti. The entry-level P76 featured an enlarged 2623 cc OHC engine from the smaller Austin Kimberley and Austin Tasman. The top-of-the-line aluminium alloy 4416 cc V8 unit was unique to the P76, and was a development of the ex-Buick V8 that was powering the Rover 3500. Safety equipment preceded the forthcoming Australian Design Rules, and featured recessed door handles and full-length side intrusion reinforcements on all doors.

Notwithstanding the advertising slogan ("Anything but average") the P76s engineering followed conventional lines.

It did offer a combination of features which were novel in this category in Australia at the time: rack and pinion steering, McPherson strut front suspension, front hinged bonnet and concealed windscreen wipers; as well as the familiar: Australian made Borg Warner gearboxes (including 3 speed column shift) and a live rear axle.