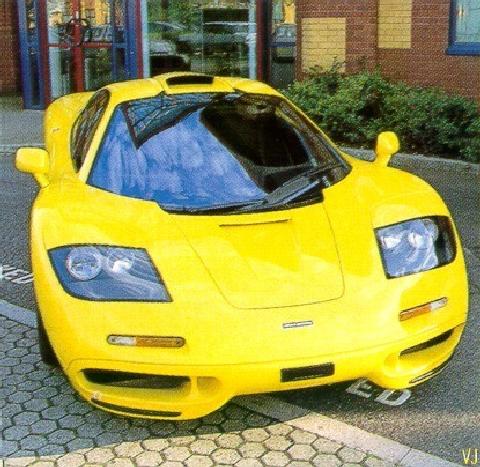 The McLaren F1 was formerly the fastest street legal production car in the world, holding this record from 1994 to 2005, the longest period the record has been held by any street legal or production car in the history of automobiles.  It was engineered and produced by McLaren Automotive, a subsidiary of the British McLaren Group that, among others, owns the McLaren Mercedes Formula One team. Today, it is still the fastest naturally aspirated car in the world.

The McLaren F1 was at the time the fastest production car ever built, eclipsing the Jaguar XJ220.  A standard version of the McLaren achieved a top speed of 371 km/h (231 mph) in 1994, holding this record for more than 10 years until it was finally eclipsed in 2005 by the Koenigsegg CCR .

Chief engineer Gordon Murray's design concept was a common one among designers of high-performance cars: low weight and high power. This was achieved through use of high-tech and expensive materials like carbon fibre, titanium, gold and magnesium. The F1 was one of the first production cars to use a carbon-fibre monocoque.

The idea was first conceived when Murray was waiting for a flight home back from the fateful Italian Grand Prix in 1988; Murray drew a sketch of a three seater supercar and proposed it to Ron Dennis, pitched as the idea of creating the ultimate road car, a concept that would be heavily influenced by the Formula One experience and technology of the company and thus reflect that skill and knowledge through the Mclaren F1.

Quote from Gordon: "During this time, we were able to visit with Ayrton Senna (the late F1 Champion) and Honda's Tochigi Research Center. The visit related to the fact that at the time, McLaren's F1 Grand Prix cars were using Honda engines. Although it's true I had thought it would have been better to put a larger engine, the moment I drove the Honda NSX, all the benchmark cars--Ferrari, Porsche, Lamborghini--I had been using as references in the development of my car vanished from my mind. Of course the car we would create, the McLaren F1, needed to be faster than the NSX, but the NSX's ride quality and handling would become our new design target. Being a fan of Honda engines, I later went to Honda's Tochigi Research Center on two occasions and requested that they consider building for the McLaren F1 a 4.5 liter V10 or V12. I asked, I tried to persuade them, but in the end could not convince them to do it, and the McLaren F1 ended up equipped with a BMW engine."

Later, a pair of Ultima MK3 kit cars, chassis numbers 12 and 13, "Albert" and "Edward", the last two MK3s, were used as "mules" to test various components and concepts before the first cars were built. Number 12 was used to test the gearbox with a 7.4 litre Chevrolet V8 to mimic the torque of the BMW V12, plus various other components like the seats and the brakes. Number 13 was the test of the V12, plus exhaust and cooling system. When McLaren was done with the cars they destroyed both of them to keep away the specialist magazines and because they did not want the car to be associated with "kit cars".

The car was first unveiled at a launch show, 28 May 1991, at The Sporting Club in Monaco. The production version remained the same as the original prototype (XP1) except for the wing mirror which, on the XP1, was mounted at the top of the A-pillar. This car was deemed not road legal as it had no indicators at the front; McLaren was forced to make changes on the car as a result (some cars, including Ralph Lauren's, were sent back to McLaren and fitted with the prototype mirrors). The original wing mirrors also incorporated a pair of indicators which other car manufacturers would adopt several years later.

The car's safety levels were first proved when during a testing in Namibia in April 1993, a test driver wearing just shorts and t-shirt hit a rock and rolled the first prototype car several times. The driver managed to escape unscathed. Later in the year, the second prototype (XP2) was especially built for crashtesting and passed with the front wheel arch untouched.

The final result is a custom-built 6.1 L (6064 cc) 60-degree V12 based on BMW's M70/S2 engine with an aluminium alloy block and head, 86 mm x 87 mm bore/stroke, quad overhead camshafts for maximum flexibility of control over the four valves per cylinder and a chain drive for the camshafts for maximum reliability, the engine is dry sump. At 266 kg, the resulting engine was slightly heavier than Murray's original maximum specification weight of 250 kg but was also considerably more powerful than he had specified.

The carbon fibre body panels and monocoque required significant heat insulation in the engine compartment, so Murray's solution was to line the engine bay with a highly efficient heat-reflector: gold foil. Approximately 25 g (0.8 ounce) of gold was used in each car.

During its pre-production stage, McLaren commissioned Kenwood to create a lightweight car audio system for the car; Kenwood, between 1992 and 1998 used the F1 to promote its products in print advertisements, calendars and brochure covers. Each car audio system was especially designed to tailor to an individual's listening taste and radio was omitted because Murray never listened to the radio.

Every standard F1 has a modem which allows customer care to remotely fetch information from the ECU of the car in order to help aid in the event of a failure of the vehicle.

The standard McLaren F1 can reach 0 to 60 mph (97 km/h) in 3.2 seconds and has an official top speed of 240.1 mph (386.7 km/h) (although with the rev limiter removed); the F1 remains as of 2007 one of the fastest production cars ever made; as of may 2008 it is only succeeded by the Koenigsegg CCR, the Bugatti Veyron and the SSC Ultimate Aero TT.  However, as stated at the head of the article, all of the superior top speed machines exploit forced aspiration to reach their respective top speeds -- making the Mclaren F1 the fastest naturally aspirated production car in the world (as of May 2008).

While many car manufacturers often promote their cars in terms of raw engine power, in terms of overall performance (acceleration, braking, and agility) a car's power-to-weight ratio is a better method of quantifying performance than the peak output of the vehicle's powerplant. The F1 achieves 550 hp/ton (403 kW/tonne), or just 4 lb/hp, compare the Enzo Ferrari at 434 hp/ton (314 kW/tonne) (4.6 lb/hp), compare the SSC Ultimate Aero TT with 1003 hp/ton (747.9 kW/tonne), also compare the Bugatti Veyron at 530.2 hp/ton (395 kW/tonne).

Source: Motorbase
Have you any further information on this car?
Click here to tell us.
There are 10 further pictures
[View Full Gallery]
Related Contacts