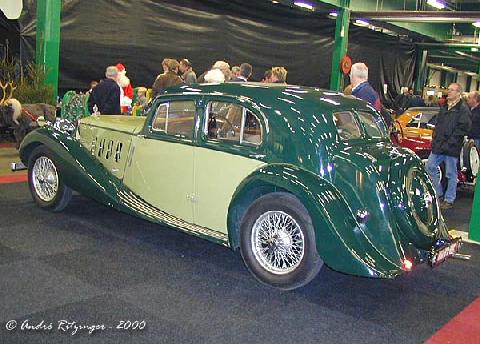 Although the SA was not the first saloon that MG had produced, it was considered by many to be the finest looking. It was the largest MG model, eclipsed only by the 2.6 litre WA in 1938 and nothing MG has produced since has come close. The saloon was one of the standard models offered and intially cost £375. Also offered was a 2 door convertible with coachwork by Salmons & Sons, known as the Tickford, and a 2 door convertible with coachwork by Charlesworth, known as the Tourer.

The SA was marketed as the "Two Litre". However after the SA was announced at the October 1935 Motor Show, and before the SA was available at the dealer network, the factory increased the engine size to 2.3 litres to give the car better performance in a competitive market.

A model of its era
The SA was a model of its era, displaying the finest of coachwork and the most luxurious interior. The intricate inlaid woodwork, the art-deco silk cushions, arm rests, the full leather interior and even a rear blind was all testament to its status as a luxury model. The sunroof was de riguer in saloons at the time, so much so that the advertising at the time omitted this fact as it was expected as standard in a fine saloon.

Standard components in luxury cars of the time were the "Jackall" jacking system with independent jacks at each wheel. The front or the rear of the car could be raised off of the ground to assist in changing the wheel. This was a frequent event at the time due to the poor quality of roads. If required the whole car could be raised by using the control located under a hatch in the floor of the passenger footwell. Another feature was the inbuilt trafficators located in the pillars of the doors, which would rise in a horizontal fashion and were illuminated for use in the dark. Cigarettes were very fashionable at the time, and there were several ashtrays (all finished in bakerlite and chrome) neatly built in the interior.

Capacious"...
The car is generous in proportion, a design feature to give the sweeping curves perspective and balance. From end to end, the overall dimension of the car was 16'1" (approx 4.9 metres) and was therefore a very large car. The interior was spacious for driver and passengers, although no self respecting owner would have let the chauffer have all the fun. In fact the marketing department coined a new term "capacious" to describe the overall capacity and space. The styling also ensured the model had a large boot, and the spare tyre was positioned in a tyre well in the boot lid, with a separate wheel cover.

Performance
The power plant in the SA was the 6 cylinder Morris pushrod engine. Not quite the performance or the technology of the MG's overhead cam 6 cylinder engines of earlier models. Economies of scale were important so it was decreed that the engine should come from the Morris Engine Plant. What the Morris engine lacked in sophistication, it made up in reliability, serviceability and volume. It was especially important to ensure the 3,325lb (approx 1.5 Metric Tonnes) car could be driven for enjoyment and not requiring regularly fine tuning. The engine was originally announced as being 2062cc, but prior to the launch in 1936 the engine capacity was increased to 2228cc and then again to 2322cc to compete with the Jaguar. Jaguar had taken advantage of the inefficiencies of the central planning of the Nuffield group by getting their car to market way ahead of MG. The horsepower tax in those days also dictated to some extent the size of an engine and hence the divergence of smaller more refined cars in the UK, compared to the bigger cars produced over the Atlantic. At the time the UK used a different calculation to other countries to establish the horse power. The SA was initally launched as a 16 h.p. with the increase to 2322cc making the car now 18 h.p.

On the road the SA was then, as now, capable of cruising at 80 miles per hour. The sports car reflected the sporting heritage of the MG Car Company, and appealed to those buyers at the time who were after something better than a standard car, and yet not outrageously priced. The sports design of the car included 18" wire wheels, knock-on hubs, long nose bonnet, and the glorious instrument panel. This panel contained a very well balanced line of instruments comprised of the speedo, rev counter, water temperature, amps, 8 day wind up clock and a fuel gauge all finished in spectacular pale gold trim. Also there was a lovely touch of refinement with a switchable petrol and oil gauge.

Production
The production of the SAs ceased with the outbreak of hostilities of World War II in 1939 and signified the end of an era. Although a relatively short production life in modern day manufacturing, the SA had made its mark. Indeed it was rare for any previous MG model to last for longer than a year in production due to the small scale of production runs, continual development and technical innovation. The next 'big car' was not released until 1949 (the Y type), although this was a compromise of availability of materials and restricted engine size due to post war rationing.
The SA was considered by many purists to not be a 'proper' MG, however the overall sales figures show that these large SVW cars were more popular than the smaller T type. There were only 3382 TAs and TBs produced in the same period as the 5514 SVWs, which supported Kimber's faith in producing a larger, more elegant car.