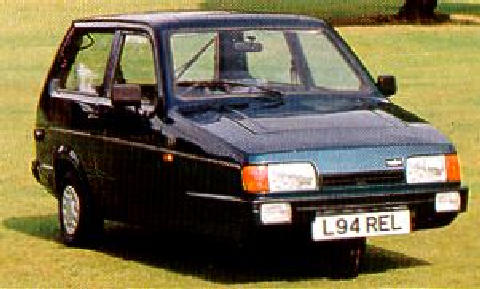 The Reliant Robin (often incorrectly referred to as a Robin Reliant) is a small three wheeled car manufactured by the Reliant Motor Company in Tamworth, England.

Being a three-wheeler with an official weight below 453.6 kg (1000 lb), the Robin can be driven by holders of a B1 category licence or car licence in the United Kingdom, and can be registered and taxed at motorcycle rates, which gives considerable savings over a conventional car. The single wheel in the front steers, while the engine (also in the front) drives the rear axle.

The Robin was first manufactured in 1973 and the final original Robin rolled off the production line in 1981. The vehicle was also produced under licence in Greece by MEBEA between 1974 and 1978. In 1989, Reliant produced a new and totally revamped Robin featuring a new fibreglass body, and increased engine power. This Robin and variants of it were available until February 2001 when Reliant announced the end of production. The final sixty-five Robins designed in 1997 manufactured by Reliant formed a Special Edition known as the Robin 65, featuring leather trim, walnut interior, and a numbered plaque, and sold for approximately £10,000. Manufacturing of the Robin resumed under licence by a company called B&N Plastics in April 2002, but stopped in October of the same year.

Reliant three-wheelers enjoy a special place in British culture, often as the butt of jokes. The Reliant Robin is staple material for comedian Jasper Carrott. However, perhaps two of the best known Reliants in British comedy are actually Reliant Regal Supervans — the dirty yellow van owned by the Trotter brothers in Only Fools and Horses, and the light blue which always ends up getting tipped over, crashed into, bumped out of its parking space etc by an Austin Mini in Mr Bean.

Source: Wikipedia
Have you any further information on this car?
Click here to tell us.
There are 5 further pictures
[View Full Gallery]
Related Contacts
[ suggest a contact ]
Related Links