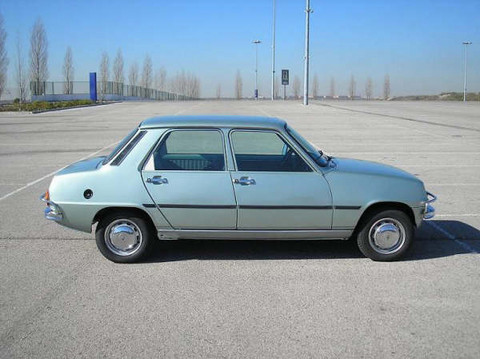 It was very similar to the R5, and identical mechanically, but offered with a smaller range of engines. The R7 had four doors and a saloon-style boot in place of the original car's three (and later five) doors including hatchback.  Another difference was the use of metal bumpers instead of plastic ones, giving the car a slightly older looking, though perhaps also more expensive looking design.  Initially powered by a 1037 cc engine, it was mostly sold in Spain. About 140,000 units were produced, and its success outside its home market was limited because Renault offered a more practical car, the larger Renault 12, for a small difference in price.

The R7 was introduced two years after the launch of the R5, then restyled in 1979, followed by an engine upgrade to 1108 cc in 1980.  Its production ended in 1982, when the brand new R9 entered the worldwide market.  What's more, a five-door version of the R5 was launched in 1980 using the door pattern of the Spanish R7.  The R5 had been substantially restyled and R7 sales did not justify the investment necessary to renew the tooling for the R7.


Source: Motorbase
Have you any further information on this car?
Click here to tell us.
There are 10 further pictures
[View Full Gallery]
Related Contacts
[ suggest a contact ]
Related Links