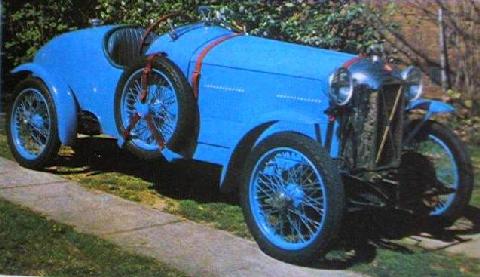 Introduced in 1927, the most famous Salmson racer appeared- a type called 'San sebastian Grand Prix' by the English and 'Gran Prix' by the French. 17, of this incredible rarity, were produced, it is believed that 2 of them still exisit.  The car in these pictures has the chasis no. GP602, it is the second of this small series to have been built.  It was delivered in Sept of 1927 to SMS London where it joined the GP's 605, 606 and 612 in many racing activities in England such as 'Brooklands' where it had a lot of success it is said that the car obtained a one-hour record in the 1100cc race in 1936, this still stand. The car was displayed in 1929, at the Olympia Motor Show in London as the race winner.

It was brought on the stand by Mr. Victor Derrington a very experienced driver who raced the GP602 for many years.

Of all the cars he owned the Salmson was by far his favourite, so much that he kept it till his death in 1972.  The car was always indoors in his factory, it was never licensed for road use and was looked after by a team of factory trained mechanics, lead by Mr. Dutton (Bugatti restorer Ivan Duttons's Father).

In 1930 some modifications were made like, the fitting of 19inch wheels instead of the beaded edge last known owner (since 1976) bought the car from Darrngton's late mechanic Mr. Dudley Gagahan.

When the car was aquired it was unchanged since the 1930's and a mechanical check up revealed that it was in very good mechanical condition.  It still has the same appearence and runs strongly, it still has its original fabric covering of the seats and pointed tail body.  The black colour that Darrington had when racing with it,has worn off a bit in some places which shows a bit of the original french racing Blue.

This car is an amazing time wrap.

The Salmson "Grand Prix" is very easy to drive; docile at lower r.p.m, easy to start and copes well with to days traffic.

However it was built as a race car and not for Sunday posing.  It has the capacity to win especially because the rear axle give an outstanding traction out of corners.

Source: Bleasie
Have you any further information on this car?
Click here to tell us.
There are 3 further pictures
[View Full Gallery]
Related Contacts