The Anzani was an engine manufacturer founded by the Italian Alessandro Anzani, which produced proprietary engines for aircraft, cars, boats, and motorcycles in factories in Britain, France and Italy.

In the UK, British Anzani outsourced the manufacture of their engines to Coventry Ordnance Works Ltd. In the 1920s it was refinanced as British Vulpine Engine Company and then again as British Anzani Engineering Company concentrating on small engines and car and motorcycle powerplants. They supplied AC Cars with the 1496cc side-valve four cylinder (that would become AC's famous 2-litre motor), Frazer-Nash with an 1496cc ohv engine, Morgan Motor Company with a V-twin, and Squire with the R1 twin cam engine. Their most well known products came to be in motorcycles, lawnmowers and outboard engines. Cotton and Greeves motorcycles used Anzani motors.

In later years the company diversified and as the British Anzani Group it finally went into liquidation in 1980. 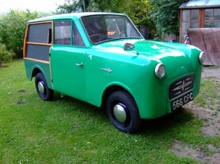 Suggest a link relating to Anzani