Ashley were manufacturers of body shells and chassis for specials from 1955 to 1962. They also offered a range of products for special builders: radiators, header tanks, lighting sets, steel tubing, sheet aluminium, various suspension parts, water pumps, tires, tubes and wheels. The company also made bonnets and hardtops for other mass-produced sports cars, including the Austin-Healey Sprite and Jaguar E-Type.


Ashley Laminates was founded in 1955 by Peter Pellandine and Keith Waddington. The name 'Ashley' was chosen as it was the name of Peter Pellandine's house in Woodford Green. They designed and built their first car using GRP for the bodyshell. The two set up a small factory in a garage next to the Robin Hood Inn at Loughton, Essex to produce shells. The garage has now made way for the pub car park.

In late 1956, the Pellandine left the company to found Falcon Shells, another specials company. Pellandine took with him the rights and tooling to manufacture the short wheelbase bodyshell for the Ashley 750 and the Sports Racer which he continued in production as the Falcon Mark 1 and Mark 2 respectively.

In 1958, to increase manufacturing space, Ashley Laminates moved to the Potteries in Upshire, whilst retaining the Loughton premises as a showroom. He also introduced a new bodyshell, the 1172, and the Regent chassis. 1960 saw the introduction of the Sportiva.

In 1961 the company moved again, this time to Bush Fair, Harlow, but the following year production of body shells ceased when the specials market waned. The company, however, continued to manufacture GRP hardtops and bonnets for sports cars.

Although Keith Waddington died in the mid-1960s, the company continued until 1972. 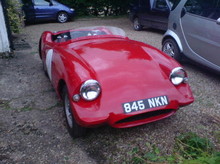 Suggest a link relating to Ashley