It will be noted that the cars were badged BRUTSCH AND NOT Breutsch as would be expected.  Just as the Spijker brothers had changed their name to SPKYER, this was presumably done to make the name easier to remember and spell correctly, but unfortunately, none of them ever went into quantity production.

There was one, two and four-seaters and included, were racing cars with Bugatti and Maserati engines.  A proposed Brutsch 1200 was based on a Ford Taunus 12M with a Brutsch designed body.  The best known of these designs was the tiny one-seat 'Mopetta'

Breutsch may not have had much success as a car manufacturer, but he was later to make his name with one of the most successful pre-fabricated building business's in Stuttgart. 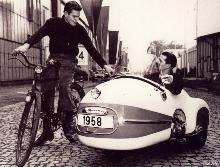 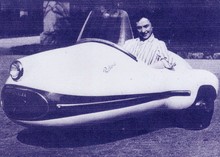 Suggest a link relating to Brutsch