After selling turbocharger kits, Reeves Callaway started building limited-edition cars for major manufacturers. His first job was making 36 turbocharged versions of Alfa Romeo GTV/6 sedans. In 1985 he developed his first twin-turbocharged Corvette, the C4. Callaway designed the Aston Martin Virage V8 engine in 1989. By 1990 a Callaway Corvette model called the Sledgehammer produced 880hp and was clocked at 254.76mph. In 1993, the Super Speedster was added to the line.

They then developed a line of normally aspirated cars called Supernaturals. A contract with Range Rover resulted in 220 C11 Limited Edition Range Rovers with 245hp engines and special black paint schemes. In 1998 they introduced the C12, a Corvette-based sports car with an all-original body. It had a top speed of 190mph (306km/h) and was raced as well as sold for street use. 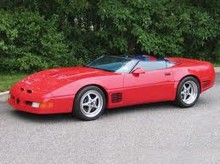 Suggest a link relating to Callaway