Anyone who visited New York in the sixties or seventies must undoubtedly know Checker from the famous yellow taxis.  These were indestructible cars which were commonly driven more than 600,000 miles or 1,000,000 km.  The first taxi was made by the Checker Cab Manufacturing Company in 1923.  They have never been wholly up-to-date but certainly very tough.  Up to 1960 they had six cylinder side-valve engines made by Continental who then produced slightly more modern overhead valve engines.  Checkers were first sold as private cars in 1959 but were never very successful.  The Continental engine was replaced in 1964 by a Chrysler engine: at first the customary six-cylinder but from 1971 the cars were also available with a V-8 engine. 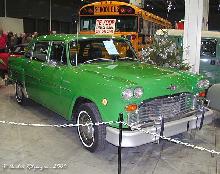 Suggest a link relating to Checker