In 1954, Packard merged with Studebaker. This would open, as management hoped, the product range so wide that S-P could offer a model in any price segment. So, Studebaker was aimed to compete with Ford, Chevrolet, Pontiac, and Plymouth.  Packard was an alternative offering for Cadillac, Buick, Lincoln, Imperial, and Chrysler.

In between, there was a wide market in which Oldsmobile, DeSoto, Dodge, and Mercury made good business. It was not desireable to further dilute the Packard name by less expensive offerings, and Studebaker had not the prestige to cover this segment.

Natural solution was the Clipper. A well-established Packard model name from 1941 - 47, and again since 1953, it was already known to the public. So, when
the 1955 models got a heavy face lift (their body dated back to 1951), it was tried to differentiate the Clipper from the Packard. So, it got its own grille pattern and stayed with its tail lights while Packards became new ones). And it got its own logo for the first time. This was a stylized steering wheel, centered by the Packard crest. More important than the new, contemporary design, alas, was the bunch of new technology that went into any Packard and Packard-Clipper: A new and truly modern V-8 ohv engine, a dual-range automatic (Twin Ultramatic) with 3 forward gears, Torsion Level Ride, a novel suspension with 4 main torsion tubes, and 2 additional on the rear axle. The latter worked together with a ingenious system of solenoids and an electro motor placed under the floor as an automatic levelizer. This was nothing less than a gadget, it was a workable, easy-to-service device that brought better roadability and comfort.  Torsion Level Ride was standard equipment on all Packards, and the Packard Clipper Custom. On Supers and DeLuxes, it was available as an option (most of these cars were so equipped). All Clippers sat now on the 122-inch-Chassis, while Packards had their own with 127 inches.

The engine for DeLuxes and Supers had 320 cubic inches and developed 225HP, Customs got the bigger V-8 with 352 cubic inches, developing 245 HP (Packards had 260 or 295 HP). The smaller unit was also sold to AMC were it propelled big Nashes and Hudsons.

Finally, for 1956, Clipper was established as a make of its own. It was registered as such, it got its own dealerships (mainly together with Packard, but in regions without a Packard dealership also with Studebaker).  It was introduced much like other makes before, for example Plymouth, deSoto, or Mercury.

The merger, the necessity of a new body plant, and the development of all the novelties had left very few money for the new make. Still, there were only two
body styles, a 6-passenger 4-door Touring Sedan and a 6-passenger, 2-door Hardtop. Ther were three trim levels: DeLuxe (only Sedan, Model 5622), Super (series 5640) and Custom (series 5660).Clippers got, together with the Packard, a slight face lift that consisted in the rear in new trunk covers, new tail
lamps, and a new side treatment for two-tone cars. In the front, they got a new grille pattern and lamp doors. Bumpers were shared with Packards as before, but the 1956 version has its horns wider apart than in the previous year. While Packards became even bigger engines, now with, 374 cubic inches and 290 or 310 HP, all Clippers had now the 352 cubic inch V-8. DeLuxes and Supers had now 240 HP, Customs 275.

Both Packards and Clippers went on sale on 5th November, 1955. The sales year became disastrous. Quality problems on 1955 cars, mainly concerning the bodies built in the new plant, and the somewhat over-engineered transmission became public. Although these problems were solved for the new model year, it accumulated with much heavier losses at Studebaker, and with massive resistance against the Clipper as a make by both dealers  who found it easier to sell a modest priced Packard than a new middle class make in this heavy-fought market - and buyers who prefered the Packard Prestige without paying for it. Management reacted in two ways:A Packard script was applied to the trunk of any new Clipper  this item also made available on all sold car without expenses. And the Clipper Custom was phased out mid-season. As a sort of replacement, the Packard Executive was introduced 15th May, 1956. A Clipper Custom in every respect but Packard badging and front clip, and a side trim of its own, this new model took the role of the entry-level Packard.

Anyway, it was too late. S-P went out of money, and was taken over by Curtiss-Wright. They were not interested in cars but in arms and jet engines,
and tax reductions. So, when production ceased 25th June, 1956, not only a model year ended, but an era of fine cars produced by Packard since 1901, as complete production in Detroit was shut down.  For 1957, there again was a Packard Clipper, built at Studebaker's South Bend plant. Strongly based on the Studebaker President Classic, it wore many styling cues from 1956 Clippers, as the tail lamps (that remained unchanged until the definite end in 1958). And the steering wheel logo generously spread all over the car.

As a make, the Clipper died in the end of its very first model year. As a model, it died a year later. The 1958 Packards wore only a body designation as their
model name. 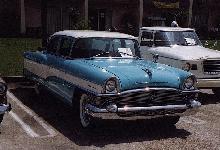 Suggest a link relating to Clipper