It started as a one-off project car for Edsel Ford, who wanted a European-style car unlike the boxier designs his father's company produced, to drive around on vacations in Florida. Gregorie sectioned a 1939 Lincoln-Zephyr V-12 Convertible Coupe 4 inches (102 mm), this custom built personal car was given the styling features known from later Continental Marks including the vertically mounted spare tire. The car was put in production for the 1940 modelyear as a model under Lincoln-Zephyr, in June 1940 the Club Coupe was added and from 1941-48 it was a model under Lincoln marque. When production ceased in 1948 a total of 5322 had been built. The Continental's spare tire mount was very distinctive, those who work on custom cars still call adding a similar mount a "Continental kit".

During 1968 and 1980 (the 1969 Continental Mark III was introduced in April 1968) Lincoln-Mercury Division produced its Lincoln Continental alongside with the Continental Mark models, this has caused a lot of confusion concerning the two marques, but Continental was a separate marque as well as a modelname for Lincoln during these years. 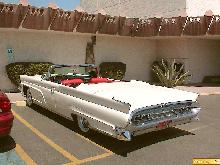 Suggest a link relating to Continental