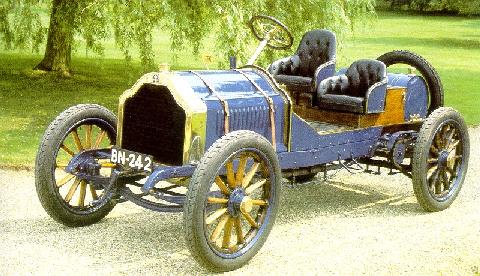 De Dietrich was a significant industrial organisation with a history stretching back to the late 17th century. It started making cars and commercial vehicles under license from Amédée Bollée in 1897, both in the firm's French factory in Lorraine, and also in Alsace, which had become part of Germany following the Franco-Prussian war settlement of 1871. New cars arrived in 1901, the German branch opting for a design from a young Italian called Ettore Bugatti, and also building the Belgian Vivinus voiturette under license; whilst the French-made cars were based on the designs of Turcat-Méry from Marseille.

De Dietrich car manufacture ceased in Alsace during 1904 but the French enterprise flourished. Racing was an important publicity tool, although the third place taken by the firm's English agent Charles Jarrott in the 1903 Paris-Madrid race was probably the most significant achievement in this period.

Prior to the Great War the cars became Lorraine-Dietrich, excellent aero engines were made during and after the conflict, and Lorraine sports cars twice won the Le Mans 24-hours race in the 1920s.