The Montet company was set up in 1912 by Bertrand Monet and Georges Goett for general engineering. After the war they decided to enter in the cyclecar market. They used Harley engines 998cc air cooled V-twins driving through a 3-speed gearbox and shaft drive. The body was a 2-seater, fronted by a vee-radiator. The name Derby was chosen for its association with the turf. In 1930 following the death of Bertrand Montet two years earlier, Derby came under the control of English capital, with the racing drivers Douglas Hawkes and Gwenda Stewart in prominent positions. Three body styles were listed and shown at the 1931 Salon, a saloon, a coupe and a roadster, all three being made by Macquet et Galvier of Courbevoie. 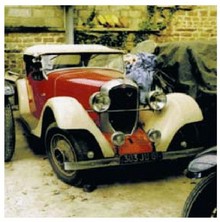 Suggest a link relating to Derby