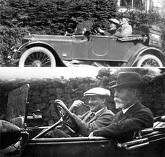 Founded in 1882 as general engineers, the Douglas firm first became involved in the car industry through supplying engine casting to Joseph Barter for his ‘Fee’ motorcycles. Backed by greater resources than most cyclecar manufacturers in 1913, the design was quite luxurious and well equipped featuring shaft drive and an air cooled engine of ‘square’ bore and stroke, priced at £200. Government contracts during World War I consolidated the company’s prosperity and the postwar offering was increased in size, weight and price, the 1920 to £500 in 1921 and 1922. At this price it was no longer viable and production ceased thereafter, the firm continuing with their increasingly successful motorcycles as their staple product.

Suggest a link relating to Douglas