English Racing Automobiles, the name by which E.R.A. was known until it was changed in 1954 to Engineering Research & Application Ltd., was founded in late 1933 by Humphrey Cook, a wealthy young Oxford graduate who had a passion for motor racing and was determined to construct a competitive British car to compete successfully on the international circuits.

The first 1.5 litre ERA racing car was shown to the public on 22 May 1934 and competed at Brooklands in the British Empire Trophy race on 23 June. Several more races were entered in 1934 and numerous wins were recorded, often against more exotic Maserati and Bugatti opposition. Over the next five years, the A, B and C type ERA 1.5 litre and 2 litre supercharged cars became the most successful voiturette racing cars in Europe.


In 1946, ERA Ltd was officially re-registered in Humphrey Cook’s home town of Dunstable, and premises occupied on the towns London Road. Development started on a new Grand Prix car, the ERA ‘E’ type, to compete in the new 1.5 litre formula. Three cars were built, GP1, 2 and 3, and showed great promise. However the promise was never really fulfilled, and the technical effort necessary proved too much for the small Company to overcome before the 1.5 litre formula was abandoned.

After a 35 year gap, ERA once again put it’s skills and knowledge into the design and manufacture of a performance car. The ERA Mini Turbo, the M type. 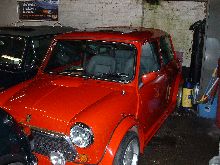 Suggest a link relating to ERA