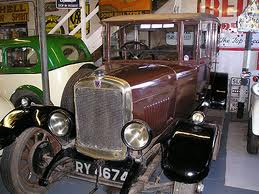 Galloway was a British car maker founded in 1920 as a subsidiary company to Arrol-Johnston. It was based at first at Tongland, Kirkcudbrightshire, and from 1923 at Heathall, Dumfries.

The company was very unusual in the world of car making in that it was largely run and staffed by women. For a while the cars were advertised as "a car made by ladies for others of their sex". The factory had originally been built as a wartime aero engine plant and T. C. Pullinger, the manager of Arrol-Johnston, was persuaded by his daughter Dorothée Pullinger to keep the factory open to provide local employment. She was made a director of the new enterprise and set up training courses and apprenticeships specifically for local women. The apprenticeships were to last for three rather than the usual five years as the girls were thought to be better at attending and quicker learners than boys.

The cars were sturdy and straight forward and a one model policy was pursued with, at first, the 10/20, which was heavily influenced by the Fiat 501. It was not however a good time to launch a new car and only a few hundred were made before the Tongland factory was forced to close in 1923 and production moved to the parent works at Heathall which had plenty of spare capacity.

A second, larger, Galloway model, the 12, essentially an Arrol-Johnston, replaced the 10/20 in 1925 and remained in production until Arrol-Johnston itself closed in 1928 and Galloway Motors was formerly wound up.

Suggest a link relating to Galloway