Bernardo Taraschi built sports and racing cars under the Urania name in 1947.  In common with others, Taraschi used Fiat parts but he also experimented with twin-cylinder BMW motor-cycle engines.  In 1950 he founded a new company together with the Giannini brothers known as Giaur.

The letters GIA are from Giannini and the UR from Urania.  Taraschi was a successful driver with Giaur, winnning his class in a race in Bari but his richest rewards were in the Mille Miglia where he won his class four times. 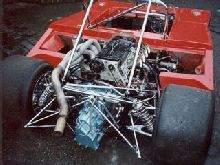 Suggest a link relating to Giaur