Bill Buckle was building his own fibreglass sports coupe when he replicated the body of the T300 in fibreglass.   It was visually similar but its dimensions differed and it was 45.5kg lighter. In 1959 an Australian initiative, the Dart roadster appeared.  For 1960 a Farina-like coupe was also produced in fibreglass, and had a larger engine and was designated TS 400.  Two further fibreglass bodies were a convertible and the 'Carryall' can.  Following the arrival of the Mini, sales fell away and the programme was halted in 1962 after 5000 units (including more than 700 Darts had been produced at a useful profit. 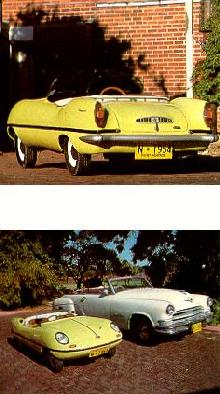 Suggest a link relating to Goggomobil