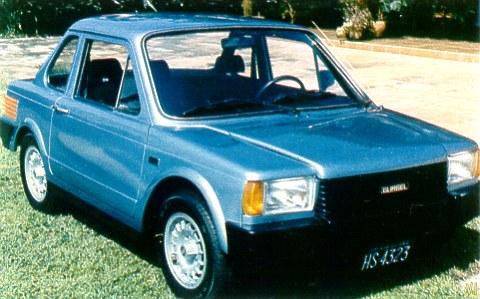 Gurgel was the brand name of Gurgel Veículos, a Brazilian automobile manufacturer, named after its founder, João do Amaral Gurgel.

The company was founded in 1969 and specialized in off-road vehicles, many of which were named after Brazil's native tribes. Early models were fiberglass bodies installed on Volkswagen Beetle (fusca) chassis and machinery.

Gurgel introduced Brazil's first domestically designed car, the BR-800, but went out of business in the 1990s.

The real cause of Gurgel's bankruptcy was bad decisions with new policies by the Brazilian government. While under total protectionism (1969-1989), Gurgel had prosperity, having as much as 1% of Brazilian car's market. In the late 1980s, then Brazilian president José Sarney granted very big loan (without guarantees) to Gurgel, from a Brazilian state bank. Sarney was so generous with Gurgel, that, while the IPI (a Brazilian value tax) was 37% and 42% for other cars, Gurgel BR-800 had the same IPI (a Brazilian value tax) of just 5% to Gurgel BR-800. Along with BR-800 Gurgel also had the production of Gurgel Carajás, a "SUV" 4 x 2 wheel drive. In fact all Gurgel's vehicles, even the prototypes, were 4 X 2 wheel drive.

The end for Gurgel began when president Fernando Collor went to office in March, 1990.Fernando Collor opened the Brazilian car market to foreign cars. Even though the import tax was 85%, the Gurgel Carajás was more expensive than Lada Niva, an SUV from then Soviet Union. The Gurgel's SUV's went out of the market. The last Gurgel Carajás was produced in january, 1991. In 1990, Fernando Collor also reduced the IPI (a Brazilian value tax) of Uno mille to 20% and sent the same level of tax to Gurgel BR-800.

By any measure, Fiat's Uno Mille, a 1000cc car, was more powerful and spacious than Gurgel BR-800. The price of both models was then similar.BR-800's sales dropped to almost nothing in 1990. In 1992, Gurgel launched a car based on Gurgel BR-800, the Gurgel Supermini. Like its similar model, the Supermini's sales were very low.Fernando Collor refused to grant a loan (without guarantees) of about US$80,000,000 from BNDES to Gurgel. Even so, Gurgel got two loans; both of them from state's governments. One from BEC (then bank of Brazilian state of Ceará) and other loan from BANESPA - then bank of Brazilian state of São Paulo. Again, both loans didn't have any guarantee. Even with these generous loans, the Gurgel's sales remained very small.In fact they fell unstoptable between 1990 and 1993. Just about 1,500 Supermini Gurgel's cars were produced, in 1992 and 1993.

In December 1992, Gurgel didn't pay the salaries of any of its workers. On first months of 1993, Gurgel halted the entire production.

In 1995, Gurgel's final bankruptcy was decreed. The Gurgel's debt only with banks was about R$210,000,000 or US$100,000,000. Gurgel's assets were less than 3% of its debt. In fact, Gurgel's assets were not even enough to pay its former workers. A Brazilian site http://www.gurgelbrasil.com/GURGEL-Jornal-do-Carro_PAG1.htm claims that Gurgel's debt was about US$1,200,000,000.Between 1969 and 1993, Gurgel launched about 12 new vehicles. One of them was the first and of course last, Brazilian electric car in commercial production; a complete commercial failure. With the sole exception of "Xavante X" and series produced mainly in 1970 decade, no Gurgel product had any commercial success. The "Tocantins" was transformed into "Gurgel Carajás".This vehicle was the leader in sells among jeeps in Brazil, until 1990. Carajás "SUV" was so expensive and bad, that when the importation of Lada Niva was authorized in 1990, by Fernando Collor, the Gurgel Carajás went out of production within a few months.Lada Niva got almost all Gurgel Carajás' market even though Lada Niva it paid an import tax of 85% in 1990. Lada Niva was better and cheaper than Gurgel Carajás. Lada Niva also was a real 4 x 4 drive, while all Gurgel's SUV's were 4 x 2 .The Gurgel BR-800 and Gurgel Supermini were both worse then Fiat's Uno Mille, far less spacious, powerful and much lass comfortable.