Willhelm Gutbrod was born in 1890.

In 1920, after working as a toolmaker and lathe operator, he became the works manager of a steamroller factory.  He joined the Eugen Klotz motorcycle factory in Stuttgart in 1923 and when the factory closed in 1926, he set up his own 'Standard-Fahrzeugfabrik GmbH' factory in Ludwigsburg.  He later bought the Seiss Zehnder motorcycle factory.  From 1930, the company made motorcycle based commercial vehicles and a move to Feverbach, near Stuttgart in 1933 saw the start of production of the Joseph Ganz designed Standard Superior 2-cylinder, two stroke light cars.  Another move was made in 1937, this time to a former jam factory in Plochingen, but Hitler's policy of 'type limitation' meant that Gutbrod had to cease production of cars and return to the manufacture of three wheeled commercial vehicles.

After WWII, Gutbrod's factory was re-named 'Motostandard GmbH', producing tractors and load carriers from 1946, Atlas forward control four wheeled trucks from 1948 and in 1949, the Gutbrod Superior 600 with a 593cc 2-cylinder, two stroke engine.  This was followed by the Superior 700 with an engine of 663cc.  Both were available from 1952 by what Gutbrod claimed was the world's first two-stroke petrol engined car's with fuel injection.  Four seater versions, the 604 and the 704 were to follow.

1954 saw the company concentrate on agricultural and garden machinery to the exclusion of all else.

The remaining Gutbrod cars went to Norway where just five of them were produced and called 'Trolls'. 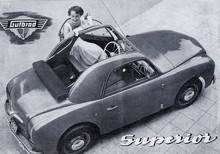 Suggest a link relating to Gutbrod