Hispano-Suiza (literally: "Spanish-Swiss") was a Spanish automotive and engineering firm, best known for its luxury cars and aviation engines, in the pre-World War II period of the twentieth century.

In 1923 the French arm of Hispano-Suiza was incorporated as the Societé Française Hispano-Suiza, the Spanish parent company subscribing for 71% of the share capital. From then on, the French company gained an increased degree of financial independence, while the technical links were always kept strong. The mascot statuette atop the radiator used by this firm after World War I was the stork of the province of Alsace, taken from the squadron emblem painted on the side of the aircraft of the renowned World War I French ace (and Hispano-Suiza customer) Georges Guynemer, which was powered by a Hispano-Suiza engine. At the time, this was an emblem of revanchism. 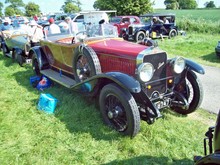 Suggest a link relating to Hispano-Suiza