August Horch was born in Germany in 1868.  At the age of thirteen , he got a job in his father's smithy.  Upon completing his studies, he worked briefly as a technical draughtsman in a machine engineering plant in Leipzig.  The talented Horch was quickly spotted by Karl Benz, who offered him a job in his factory in Mannheim.  Horch became so fascinated by cars that he decided to start his own company in 1899.  Just one year later, the first prototype emerged from his small workshop.  In 1904, the first Horch with a four-cylinder engine was introduced and this was even followed in 1908 by a model with a six-cylinder engine.

In 1909, August Horch left the company flowing an argument with his fellow directors.  He then continued independently with the new make, Audi.  In spite of the departure of its founder, the Horch make continued to exist.  The factory made cars with big 6.4 litre engines or small four-cylinders with capacities of around 1600 cc.  In October 1926, the Horch 8 was introduced.  This car would go down in history as the first German production car.  The Horch 8 was powered by a marvellous eight-cylinder engine, developed by the company in house.

Between 1931 and 1933, a V12 engine was also included in the range.  From 1933, the factory restricted itself to the 'smaller' eight cylinders with the engine sizes between 3.0 and 4.0 litres.  The most beautiful models date from this period, and were very popular with the Nazis.  Between 1935 and 1940, the 850, 853 and 855 models were fitted with a 5.0 litre eight-cylinder engine.  During the Second World War, Horch built (in between bombardments) mainly off-road vehicles and light armoured vehicles for the Wehrmacht.  After 1945, the make finally vanished from the market. 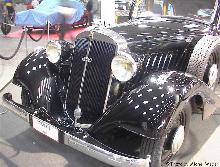 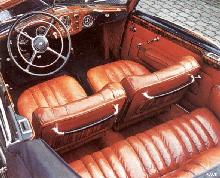 Suggest a link relating to Horch