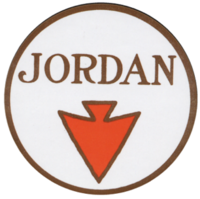 The Jordan Motor Car Company was founded in 1916 in Cleveland, Ohio by Edward S. "Ned" Jordan, a former advertising executive from Thomas B. Jeffery Company of Kenosha, Wisconsin. The factory produced what were known as "assembled cars" until 1931, using components from other manufacturers. Jordan cars were noted more for attractive styling than for advanced engineering, although they did bring their share of innovations to the marketplace.

Jordan parts were obtained from outside vendors. The cars were powered by Continental engines, used Timken axles, Bijur starters, and Bosch ignitions. According to Ned Jordan's biographer, James Lackey, the source of early Jordan bodies was somewhat a mystery. While Jordan had the capacity to paint the automobile bodies and attach them to the chassis and outfit the passenger compartment, the facility was unable to fabricate the bodies themselves. Later production bodies were shipped from a variety of manufacturers in Ohio and Massachusetts. They were fabricated from aluminum.

Suggest a link relating to Jordan