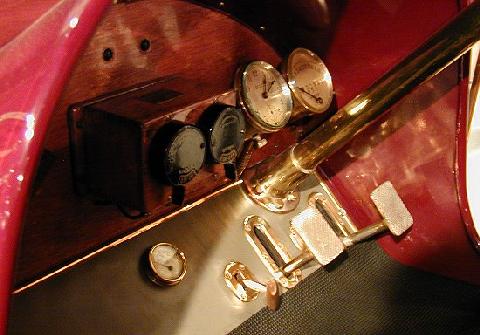 Harry A. Knox was the first car manufacturer to use air-cooled engines.  In 1900, he set up the 'Knox Automobile Company'.  In that same year he sold fifteen three wheelers and in 1901, more than one hundred of these strange vehicles were produced.  In 1902, Knox introduced a car with four wheels.  In that year, more than 250 models of this car were sold.  These cars were also fitted with air-cooled engines.  As of 1907, the cars were driven by a cardan shaft instead of by chains.  In 1908, the client could also opt, for the first time, for a water-cooled engine.  Knox cars were relatively expensive and this was not conducive to sales.  The company was regularly in financial difficulties.

In 1912, a petition for bankruptcy finally had to be filed.  The new owner moved in 1914 to the construction of lorries, principally for the American army.

The first cars that Harry A Knox produced in Springfield Massachusetts were three-wheelers, with a tiller steered single front wheel. Beneath the seat was a 1½-litre horizontal air-cooled engine that drove the rear axle by single chain via two-speed planetary transmission. The engine had the distinctive feature of the heat being dissipated through a multitude of 2-inch steel studs screwed into the cylinder barrel and head. This earned the cars the nickname 'Old Porcupine' although the firm referred to the cars as the Waterless Knox. Horizontally-opposed twin-cylinder four-wheeled cars were available in 1902, but tiller steering was retained until 1905.

Successful commercial vehicles had been introduced in 1904 but when the cars became water-cooled in 1908 individuality was lost, and large horsepower cars offered at increasing prices inexorably led to the demise of the business.

Suggest a link relating to Knox