The make La Salle was part of the Cadillac group and produced cars of the same excellent quality.  The bodies of the cheaper and sportier La Salle were designed by the famous designer Harley Earl.  The most expensive version was the Imperial Sedan which costs $2,875, $120 less than the cheapest Cadillac.  The 5.0 litre engines were also completely interchangeable.  Along with all other car manufacturers, La Salle also suffered as a result of the world-wide economic crises.  General Motors wanted to discontinue the make.  It is only thanks to Harley Earl that this did not happen.  Earl designed new bodies and devised a way of producing the cars more cheaply.  In 1935 the prices were lowered once again.  Sales rose to 8,851 cars.  In 1937, La Salle cars were once again fitted with Cadillac V8 engines, but when only 10,382 cars were sold in 1940, Cadillac decided to discontinue the make altogether. 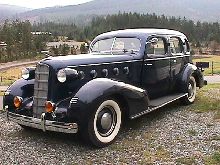