Derived from the DART prototype car which later became the Mini-Marcos, the Minijem was essentially the same car using Mini mechanical components as a basis.

Produced from 1966 until 1974 at various locations the Minijem can be considered as a success, nearly 250 examples were built before production ceased. 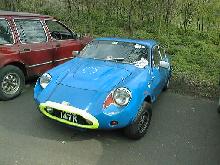 Suggest a link relating to Minijem