Frank Kurtis developed a good reputation for building competitive motor sports cars.  His cars had won the Indianapolis 500 among other successes.  In 1959 he also turned his hand to road-going cars.  His car had a polyester body and was a two-door two-seater roadster.  When Kurtis had built 36 of them he sold the factory, complete with tooling and parts, to Earl "Madman" Muntz who had made a great deal of money out of selling television sets.

He could therefore afford a certain amount of risk.  Unfortunately the cars did not sell as well as Muntz hoped.  Muntz extended the wheelbase by 311/2 in (80mm) so that he could offer a four-seater and he replaced the polyester body with one of aluminium.

Although customers could choose whichever V-8 engine they preferred, the cars were supplied as standard with a Cadillac V-8 unit.  Muntz moved his works from California to Evanston Illinois in the winter of 1950-1951, where 366 cars were built that all had steel bodies and a Lincoln engine. 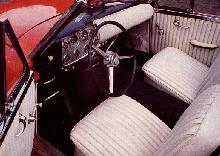 Suggest a link relating to Muntz