The Pagani Zonda C12 was a supercar with central carbon-fibre chassis with chrome-moly steel space frames at either end, and carbon-fibre body panels.  It was powered by a mid-mounted 6-litre Mercedes-Benz V12 engine installed longitudinally and driving through a 6-speed gearbox.  In 'normal' form the engine gave 394bhp but Pagani planned to offer the C12S with AMG-tuned 7-litre engine giving well over 450bhp.  One C12 was shown at the 1999 Geneva  show, when Pagani had three other cars under construction, to sell at £250,000 each.  The 2000 Geneva Show saw the restyled Zonda S, with the AMG-tuned 7-litre Mercedes Benz V12 giving 550bhp.  Nine cars had been built by February 2000, and the makers hoped to turn out 25 during the year. 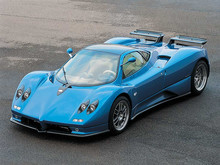 Suggest a link relating to Pagani