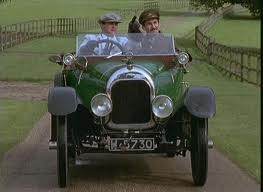 The Perry company dated back to 1824 when James and Stephen Perry started to make pens in London.  By the 1890s the company was in Birmingham and engaged in the bicycle business.  They were on the point of collapse when they were bought by James William Bayliss-Thomas whose son Cecil was to be instrumental in the first Perry car.  A motor tricycle was built in 1899 and a forecar in 1903, and in 1911 Cecil Bayliss, aged 19 desinged a cyclecar powered by an 800cc Fafnir engine, with 2-speed epicyclic gearbox and overhead worm drive.  It proved under-powered and his twin engine made in the factory with pistons that rose and fell together rather than alternately, in unit with a 3-speed gearbox and overhead worm drive as on the prototype.  The standard body was a 2-seater on an 84in wheelbase.  About 800 twins were made, including one chassis assembled in 1919.

In 1914 a large Perry with 1794cc 4-cylinder engine joined the twin.  It had a separate gearbox and straight bevel rear axle, as did the later twins.  The bodies were 2-or 4-seater tourers, mostly made by Mulliners of Birmingham.  About 300 were made up to 1916, and a further 3 assembled from parts in 1919.  By then the design had been sold to Bean, who introduced it as the 11.9hp Bean.

Suggest a link relating to Perry