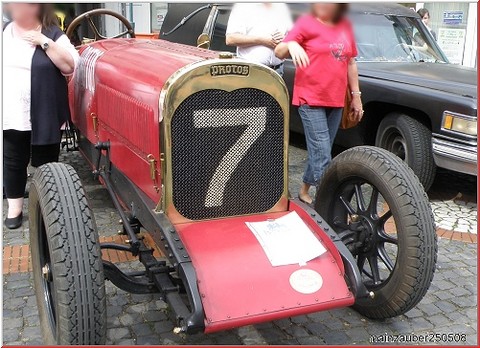 In 1908 the firm had financial problems and was then sold to the Siemens-Schuckert-Werke in Spandau and then belonged to the German Siemens Electric Industries. Siemens-Schuckert hoped to polish up their lost investments in the production of electrical vehicles through the building of petrol cars. Already the firm built 6 cylinder models with 100 hp.

In Spandau began then the industrial production of Protos cars, they belonged to the most famous German cars, the so called noble cars. Noble for sure because even well known people like prince Heinrich from Prussia the brother of Kaiser Wilhelm II was an enthusiast of Protos. He was the guy who invented and patented (1908)  the first windscreen wipers for cars. The car pool of crown prince Wilhelm II consisted of Protos cars so that the firm advertised 1911. The German crown prince, the sport loving and expert of automobiles, drives personally only Protos vehicles.

In the year 1908 the newspapers Le Matin in Paris and the Herald Tribune in New York organised a round the world car race. The race started on the 12th February 1908 from New York over the Rocky Montains, Alaska, over the ice to Siberia and then through Europe to Paris. The four teams from France, Italy, America and Germany managed a daily distance of about 625 Kilometers and drove through areas where cars had never been driven before.  For Germany was on the start Overleutenant Hans Koeppen and his mechanics Knape und Maa. They were sponsored by a Berlin Newspaper agency and won the race on the 26th June 1908 after 21278 Kilometers drive.

The 30 hp 4 cylinder car was a serial production with a few changes and is standing in the condition of its arrival in Paris today in the German Museum in Munich.  Protos was the first car to drive around the world and win the race by 4 days. Through this success the name Protos became famous.

A Protos 4-cylinder-2.6-litre racecar took part in the first race at the AVUS-track in Berlin, already in cooperation with NAG. Later, in 1926, the Protos-works were sold to NAG, the "Nationale Automobil Gesellschaft" in Berlin.  This race-car seems to be the only remaining car of that type worldwide.

Many of the Protos cars built on the Nonnendamm in Berlin were exported to Russia, Middle and South America. In Brazil a Protos was one of the first cars ever. Today this car is standing, refurbished in the Nation Museum of Rio de Janeiro.

Many Protos racing cars and armoured cars were delivered to Mexico, also many Protos trucks were exported to Turkey during the First World War.

Different car builders used Protos chassis for the construction of special vehicles, for instance the Berlin firm Schebera built Protos taxis, and the firm Utermoehle built 1911 for the sultan of Sumatra an imaginative aluminium carriage on an extended Protos chassis.

After World War One the management of Protos decided only to carry on building the C-type which had been developed 1913. Until 1927 Protos built 16150 cars with four cylinder,30 bhp, (later 45 bhp.), 2596 cubic capacity motors. With this motor the car was able to drive 90 Km/h, managing 100 kilometers with 15 litres petrol.

Sorry to say this magnificent car didn't get further developed and lost its significance against other car firms. The monthly production of 120 to 150 cars built by 1430 workers wasn't enough for the firm to survive. That is the reason why Siemens sold Protos to the AEG towards the end of 1926, which AEG combined with the car firm NAG.

On the 1st. July 1927 the last Protos, lovingly decorated, left the works in Nonnendamm. 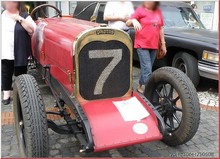 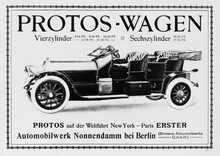 Suggest a link relating to Protos