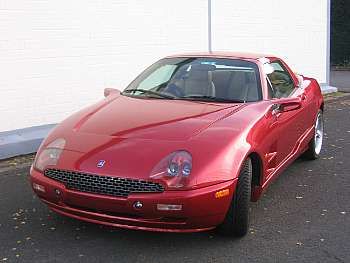 In 1998 Bruce Qvale (an American who, together with his father before him, has been around the fringe of the motor industry for many years) purchased the rights to produce and market De Tomaso cars in all markets except the UK and Italy.

With a significant injection of cash from this new source, the first new product was the Mangusta, originally the De Tomaso Bigua, first shown at the 1996 Geneva Motorshow. Designed by Marcello Gandini it is a front engined (Ford 4.6-litre V8 with 320bhp) rear wheel drive 2+2 convertible. The engine and some other mechanical parts are taken from the Ford Mustang, whilst the panels are made in France. Mechanicals are conventional with double wishbone suspension, Bermbo brakes and Bilstein coil-over units all round.

A new factory at Modena was constructed to build the cars, and they went on sale early in 2000. After that the company broke all links with De Tomaso and was later purchased by the MG Rover Group.

Suggest a link relating to Qvale