The Reo Motor Car Co. was founded by Ransom Eli Olds after he parted company with the Olds Motor Works for which he had designed the famous Curved Dash Oldsmobile, the world's first mass-production car.  In August 1904 Olds set up the R.E. Olds Co., with financial backing from Reuben Shettler, who had earlier helped to finance the Olds Motor Works.  The owners of Olds' original company objected to the use of his name in his new venture, so he quickly changed it to the Reo Motor Car Co., using his initials. 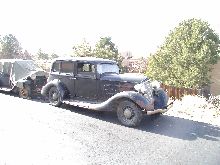 Suggest a link relating to Reo